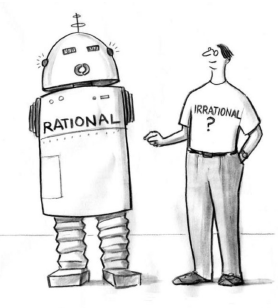 What is rationality? Or, more concretely, what is a rational agent? In economic theory, a rational agent tends to always make the best possible choice based on his or her own interests. Rational agents maximize their utility given the preferences, constraints, perceived opportunities, and available information. The rationality hypothesis has its own limits, though. Humans are not clear-minded. Our emotional nature leads to inconsistency in

Rational agents maximize their utility given the preferences, constraints, perceived opportunities, and available information. The rationality hypothesis has its own limits, though. Humans are not clear-minded. Our emotional nature leads to inconsistency in decision making. Our perceptions are often systematically biased by cognitive constraints, such as over-confidence or optical illusions. Overall, humans do not always take into account all the available information simply because, as several studies have shown, our brains are not equipped to do so. But, what if all of this economic theory based on rationality could actually be applied to some sort of rational-by-construction “being” such as a machine? Imagine that you and an artificially intelligent machine both face the same economic game. Which one out of the two do you think will optimally solve the problem? In fact, which one out of the two is the rational agent economists are looking for? Due to our imperfections as human beings, we might question ourselves whether we, as humans, are the best option of rational agents available to economists. The emergence of artificial intelligence and machine learning in recent years seems to have an answer to this question. Artificial intelligence (AI), as its name suggests, is the intelligence exhibited by machines. By mimicking cognitive functions of human minds and interactions, an intelligent machine is capable of learning and solving problems in a way that maximizes its chance of success just like humans do. With its perfectly mechanical decision making process, AI is gradually gaining attention from economists. “Theories of normative design from economics may prove more relevant for artificial agents than human agents, with AIs that better respect idealized assumptions of rationality than people, interacting through novel rules and incentive systems quite distinct from those tailored for people”, as mentioned in a paper written by David C.Parkes, professor in computer science and applied sciences at Harvard. AIs possess greater advantages than us on economic domains such as matching, market clearing solutions, preference modeling, or game theory. Take computer poker as an example. In this typical game with imperfect information, uncertainty and complexity, expert human players have long developed high skills, but game-theoretic algorithms have taken place and predominated over the last decade. Researchers have recently developed AIs having attained perfect rationality in a two player setting of poker. They calculate faster, play wiser, and “think” broader. AI agents have been found to be much more efficient in decision making and strategic reasoning than human beings in some fields. AI may surpass humans in things like playing chess, analyzing massive data, even executing complex financial decisions by exploiting volumes of economic news. Our rationality has been proved no better than these artificial agents made from algorithms. Since rational AI systems do better than a human in such various ways and do not pursue the identical reasoning of humans, they may have the chance to be an ideal solution of our shortcomings in the context of rationality. The transition from “homo economicus” to “machina economicus” becomes a tendance that we can not overlook. Works in this field have already been carried out, such as articles published on Science by David Parkes and Michael Wellman, discussing how AI can reshape economic theories and the possibility of a specially designed economic framework for machines. Certainly are there challenges. For example, for AIs to make rational choices, they have to treat each other as equally rational agents. Work remains to be done in establishing an interactive multi-agent system for AIs for them to carry out optimal behaviours. Moreover, the absence of common sense, cultural knowledge, and moral reasoning in artificial agents is not likely to be solved in the short term either. No matter how inspiring the advances in AI techniques are, economists should always keep in mind that there exists no perfect solution. The absolute rationality of economic agents should only be an ideology. Constructing a better vision to see our real life may require the combination of efforts from human beings and artificial intelligence, as they both share advantages and limits. The pursuit of a rational mind is still a long journey.

TSE is a vibrant research center and school of economics where students, professors, researchers and staff interact in order to produce cutting edge papers, conferences and classes. The TSEconomist (TSE’s student magazine) aspires to put itself at the heart of these interactions offering its readers and contributors a rewarding experience.

Our mission is to provide a constant platform of communication between all members of the TSE community, its visitors and alumni. Our magazine, and this blog, are run by the vibrant TSEconomist team, with more motivated members joining us each day. We invite you to do the same!